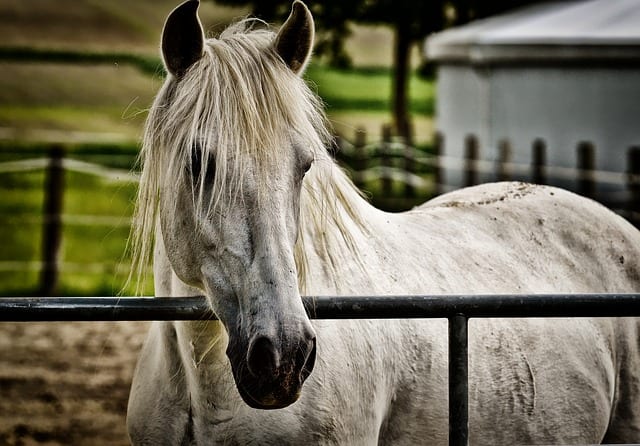 I have been asked on many occasions whether magnesium supplementation is essential for pets, horses and livestock. The answer is simple – yes, of course.

The majority of studies involving magnesium deficiency are conducted on animals, and every study I have read through shows that magnesium supplementation not only corrects the deficiency, but also helps to relieve multiple symptoms associated with it, such as systemic stress, muscle spasms, disorders of the nervous system, digestive problems, arthritis, inflammatory conditions, helps lower blood pressure, and much more.

Not only does magnesium supplementation relieve the above symptoms, but has a positive effect on general health as well – it improves immunity, raises energy levels, regulates appetite, improves sleep and general well-being of animals and livestock.

I quote results of various studies here, to show how magnesium deficiency and supplementation affect animals.

In the Studies of Magnesium Deficiency in Animals – Symptomatology Resulting from Magnesium Deprivation by H.D.Kruse, Elsa R.Orent, and E.V. McCollum, conducted as early as 1932 by the Biochemical Laboratory of the School of Hygiene and Public health at John Hopkins Univeristy, Baltimore, the following studies were cited:

1. As early as 1926, J.Leroy concluded that when mice were placed on a diet extremely low in magnesium – 0.00103% part to 100,000 – when they were 26 days old, the action arrested their growth in 9 to 13 days, and led to death in 26-34 days. “On the other hand, the control ration containing the basal rate of 0.023% of added magnesium, permitted normal growth and development. Moreover, the change to this control ration after the animals had been depleted on the magnesium-low diet sharply checked their weight losses, permitted resumption of growth, and prolonged their lives in excellent condition for the 190 days that the experiment was continued”.

2. Unsatisfied with the conclusions of the above mentioned study, H.D. Kruse et al conducted their own experiment in order to see what other symptoms magnesium deficiency led to. They have concluded that when placed on a diet which was extremely low in magnesium (1.8 ppm), the rats met an early and violent death. The symptoms included hyperaemia caused by vasodilation, followed by nervous irritability and hyper-excitability, which was followed by a sudden fright at a slight sign of disturbance on day 18, followed up by a convulsive seizure. All respiratory movement seized during the attack.

In the same study the severely depleted in magnesium rats were then placed on a diet with the magnesium levels restored to a normal level. Only 5 days later they showed weight gain of 20-25g, and growth of new hair. Their behaviour was restored to normal, and they were completely free of any symptoms by week 12.

The authors of the study were unsure why the depletion in magnesium could have caused visodilation, but have concluded that “these symptoms may be part and parcel of one condition, tetany”, which they went on to explore further.

Most animals on a diet which is natural to them, grown on magnesium-rich soil, do not experience these symptoms, since their magnesium levels are unaffected. However, in modern times, when the soil is so poor in essential minerals, not only humans become deficient in magnesium – it affects animals in equal measure. This means that magnesium needs to be replenished via supplementation.

Like with humans, animals can be supplemented with magnesium both orally and transdermally. Oral supplementation can be done via adding natural mineral substances like dolomite, containing calcium and magnesium in proportionate levels. Another way is to add magnesium chloride to the feed.

Transdermal method involves spraying/ massaging magnesium oil into the skin of an animal. I have been asked repeatedly by horse owners if magnesium chloride benefits horses. I can give only one answer – yes, it does. Horses especially are subjected to magnesium losses through exercise, which can lead to muscular fatigue, seuzures, arthritis, and resultant poor performance.

Magnesium chloride oil massaged into the skin of a horse will deliver magnesium to the muscles and body systems quickly and efficiently, by-passing digestion and thus preventing further magnesium losses through the eliminatory system.

With pets it can be a bit more difficult to apply magnesium oil on the skin, depending on the thickness of the coat. It can also be uncomfortably hot for an animal. So an addition of dolomite or a small dose of magnesium chloride to the food would be an alternative method of magnesium supplementation.