I’ve come across this article which I thought was too important not to share. It shows why we need magnesium in order to maintain not only a youthful appearance but also a healthy body. The ratio between magnesium and calcium needs to be maintained at the level which helps our tissues to remain supple and flexible. Otherwise an imbalance between calcium and magnesium leads to the deposition of calcium and hardening up of all the tissues. Eventually it leads to death.

The average American consumes only 40 percent of the recommended daily allowance of magnesium. This has serious consequences, including death, in many people, according to magnesium expert Dr. Mildred Seelig. Eighty to 90 percent of the U.S. population is magnesium deficient.

Dr. John Prutting said in an issue of “Family Circle” that 70 percent of Americans had mismanaged their diets enough to have some degree of magnesium deficiency.

Magnesium activates 76 percent of the enzymes in the body according to Dr. Sonni Alvarez. Potassium is primarily concerned with the way we use calcium and sodium.

Most mineral deficiencies stimulate an appetite for the deficient mineral, but there is no “specific appetite” for magnesium Although intravenous magnesium is the drug of choice at the onset of a heart attack, it is not mentioned in the section on arrhythmias in the 1989 “Compendium of Drug Therapy.”

Magnesium is useful in preventing unwanted calcification in the kidney, bladder and in the joints.

If a diet is high in phosphorus (common in many meat dishes as lunchmeats, hot dogs, etc. and also in soda drinks), the phosphate binds up the magnesium into magnesium phosphate, which isn’t absorbed. Thus, you need more magnesium for complete balance.

Rabbits just can’t take a high-cholesterol diet. Their blood fat level goes up, and they get severe arteriosclerosis/atherosclerosis. However, if you feed them five times the recommended daily allowance of magnesium, their cholesterol goes down and they don’t get arteriosclerosis.

Magnesium is a very important ingredient of the green coloring matter in plants (chlorophyll). Magnesium helps in the use of fat in the diet. In many cases of individuals suffering from irritability, the blood has shown low values for magnesium.

Magnesium ensures the strength and firmness of the bones, and it makes the teeth harder. Adequate intake of magnesium counteracts acidity, poor circulation and glandular disorders. Children with magnesium deficiency are very often mentally backward. 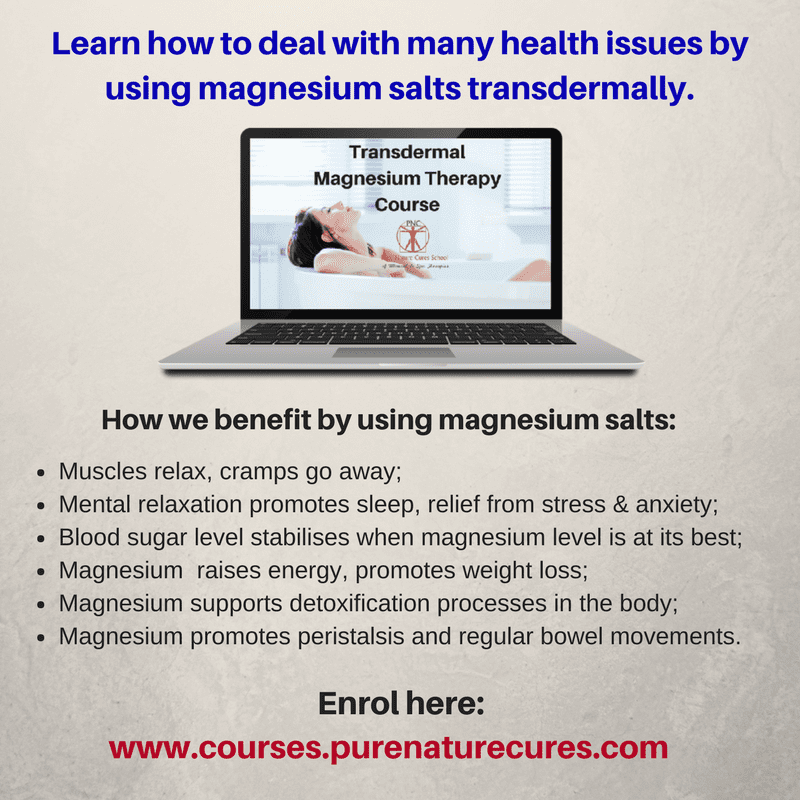 The absorption of magnesium from the intestines may be influenced by (1) the parathyroid hormone, (2) the condition of the intestines, (3) the rate of water absorption, and (4) the amounts of calcium, phosphate and lactose (milk sugar) in the body.

Recent studies have shown that magnesium deficiency is found in 25 percent of eating disorders, such as obesity and anorexia nervosa. Symptoms such as weakness, leg cramps, anxiety and confusion will often clear up with magnesium therapy. A magnesium deficiency in humans can occur in patients with diabetes, chronic diarrhea or vomiting.

Heart palpitations, “flutters” or racing heart, otherwise called arrhythmias, usually clear up quite dramatically on 500 milligrams of magnesium citrate (or aspartate) once or twice daily or faster if given intravenously.

A diet which is high in calcium increases the body’s need for magnesium and also may increase the excretion of phosphorus and calcium; however, dietary intake of magnesium remains relatively low. The chemical reaction of magnesium is alkaline (acid binding). It regulates the acid-alkaline balance of the body.

Magnesium is one of the nutrients needed to lose weight. Undulant fever is said to clear up if above-adequate amounts of magnesium and manganese are given.

Without sufficient magnesium, one cannot control the adrenals, and this lack of control can result in diabetes, hyperexcitability, nervousness, mental confusion and difficulty coping with simple day-to-day problems. Depressed and suicidal people often display inadequate levels of magnesium.

Magnesium helps induce passage of nutrients in and out of cells and thus affects the life process. It also controls metabolism of proteins, fats, and carbohydrates, resulting in more normal nutritional levels. Japanese investigators have discovered that magnesium will relieve asthmatic attacks. They give it intravenously for acute asthma and orally for prevention.

The power plant of human cell is called the “mitochondrion.” The mitochondrion is what generates energy for the cell to use. What everyone refers to as “energy” is derived from the oxidative reduction of the cellular respiration. This is done through the mitochondria.

The end result? The mitochondrion, the powerhouse of the cell and the entire body, becomes calcified. This is the beginning of aging. It all starts in the cell. First the cells age. This leads to organ aging. And after the organs age, individual aging occurs. Since calcium is readily accumulated by mitochondria, this ion is potentially capable of antagonizing the activating influence of magnesium on many intramitochondrial enzyme reactions.

This means that every function of your body can be inhibited when the mitochondria calcify. It’s like going through life with the emergency brakes on. Calcium is the brake. Magnesium is the accelerator. To be in optimal health, there must be a balance between the two.

Both minerals are vitally important, but there must be that critical balance.

Andre Voisin in his book “Soil, Grass and Cancer” wrote: “Calcium content cannot be considered separately without taking the other mineral elements into account. It is the equilibria, and not the individual elements, that govern the phenomena of life.” That’s the magic word – “equilibria.”

Tragically, in many cases, children are now starting to show high cellular calcium levels. For many people, eating a diet high in calcium and low in magnesium amounts to “cellular suicide.”

Calcification can cause a thousand illnesses. As the body grows, the calcium migrates from the hard tissues (bones) to the soft tissues in your body. Few understand the full scope of this program. It is the most prevalent clinical finding in industrial cultures.

Where the calcium buildup occurs depends upon your individual biochemistry. Calcium deposits in the joints are called arthritis; in the blood vessels it is hardening of the arteries; in the heart it is heart disease, and in the brain it is senility.

The calcification process develops slowly. It occurs gradually over 10, 20, 30 years or more. It can begin in childhood. There is almost no soft tissue in your body that is immune from calcification, including your various glands.

All of this fits so well with my basic belief in medicine, which rests upon the word “balance” – mental, spiritual and physical balance. If we have perfect peace of mind and soul and eat a nutritional poison-free diet, we will have no disease, because, after all, each of us in a scientific sense, is a chemical factory.