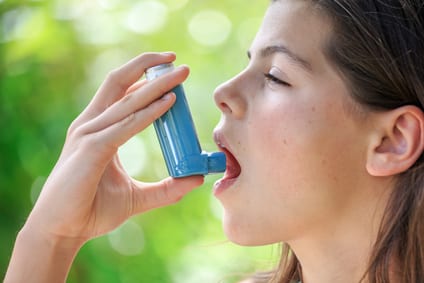 With the pollution levels this weekend at record high in central London, many people will be adversely affected by the smog hanging over the city as a result of 3 major factors: man-made hell (the pollution from cars and factories), the active sun facilitates dangerous chemical reactions in the atmosphere, the high levels of pollen, and high atmospheric pressure which does not allow the harmful particles to escape.

Needless to say, allergy and asthma sufferers are worst affected by these conditions.

How can magnesium supplementation help reduce the systemic stress and symptoms of asthma and allergies associated with the current crisis? I quote results of 2 separate studies which have been published in this blog earlier. They show that adequate magnesium levels in the body play a vital role in the management of asthma.

“Magnesium in the management of asthma: a critical review of acute and chronic treatments, and Deutsches Medizinisches Zentrum’s (DMZ’s) clinical experience at the Dead Sea.

The recognition of asthma as an inflammatory disease has led over the past 20 years to a major shift in its pharmacotherapy. The previous emphasis on using relatively short-acting agents for relieving bronchospasms and for removing bronchial mucus has shifted toward long-term strategies with the use of inhaled corticosteroids, which successfully prevent and abolish airway inflammation. Because some of the biological, chemical, and immunological processes that characterize asthma also underlie arthritis and other inflammatory diseases, and because many of these conditions have been successfully treated for the past 40 years at the Dead Sea, we were not surprised to realize and record the significant improvement of asthmatic condition after a 4-week stay at the Dead Sea: lung function was improved, the number and severity of attacks was reduced, and the efficacy of beta2-agonist treatments was improved. After reviewing the acute and chronic treatments of asthma in the clinic (including emergency rooms) with magnesium compounds, and the use of such salts as supplementary agents in respiratory diseases, we suggest that the improvement in the asthmatic condition at the Dead Sea may be due to absorption of this element through the skin and via the lungs, and due to its involvement in anti-inflammatory and vasodilatory processes“.
http://www.ncbi.nlm.nih.gov/entrez/query.fcgi?db=PubMed&cmd=Retrieve&list_uids=9777879&dopt=Abstract

“Magnesium therapy was tried in a study published recently in the Journal of Asthma [1]. In it, 55 adults with mild-moderate asthma were treated with magnesium (170 mg, twice a day) or placebo over a period of 6.5 months. Individuals had their lung function tested using peak expiratory flow (the maximum speed air can be expelled from the lungs) as well as something known as the methacholine challenge test. Metacholine causes constriction of airways. In this test, subjects breath in metacholine and the dose of this drug required to induce constriction in the airways. The higher the dose of metacholine required, the less ‘reactive’ the airways would be judged to be.

Compared to those taking the placebo, those taking magnesium saw significant improvement in both their peak expiratory flow rate and metacholine challenge results”

QUICK WAY TO REPLENISH MAGNESIUM LEVEL AND KEEP IT HIGH

Oral supplementation is probably the first one most of us will think of when we talk about topping up our level of magnesium in the body. However, not all of us can absorb oral magnesium efficiently, especially if the digestive system is clogged up with impurities, or is not very efficient – which is true of the majority of the world population over the age of 30. Even when it is healthy, much of magnesium we take orally passes through the body unabsorbed, and if we take too much then even less of it will be absorbed since it is a laxative.

This makes transdermal magnesium supplementation a much more suitable and attractive option for most people. Transdermally, magnesium gets into the cells – where it is most needed – much more quickly than it does when taken by mouth.

The most popular ways to supplement magnesium transdermally is a bath, a spray, or massage. Body spray and massage are the most economical ways to do it. Just spray or massage the body with magnesium oil once a day after a bath or a shower. Leave it on for 1 hour, or even overnight if you can, and you should feel the relaxing and tension relieving effects of magnesium very soon.

Transdermally, magnesium can also be administered in baths, foot baths and compresses. For a bath, I suggest using magnesium flakes as the more economical way to achieve the best concentration. Use about 500g -1kg of magnesium chloride flake in a bath, and 250g – 500g in a foot bath. Such procedures are most beneficial before bedtime since deep relaxation resulting from an increase of magnesium in the body will certainly promote sleep.

This is an amazingly relaxing and therapeutic treatment which I have developed recently. It is aimed at those who are desperately deficient in magnesium and need quick supplementation. The treatment uses far-infrared heat to open up pores and boost circulation not only in the skin but in deeper body structures. With the pores open and blood flow increased, magnesium stands a better chance to be absorbed quickly and in large quantities.

The treatment is preceded by massage to stimulate circulation and soften up the tissues. The infrared heat helps to open up the cell membranes, which contributes towards magnesium absorption.

Apart from being very therapeutic, the treatment is thoroughly relaxing, thanks to the effects of magnesium and the infrared heat. It promotes detoxification on the cellular level, helps to relieve aches, pains, muscle spasms, arthritis, sleep problems, fatigue, boost immunity, promotes relaxation, helps to relieve water retention and is a really great start to a weight loss programme. People generally lose a lot of water during the treatment which has an added physical effect of feeling lighter afterwards.

One of my customers described the way she felt during the treatment as “wrapped in a soft cocoon”, and another said that it felt “like being in a mother’s womb waiting to be born”.