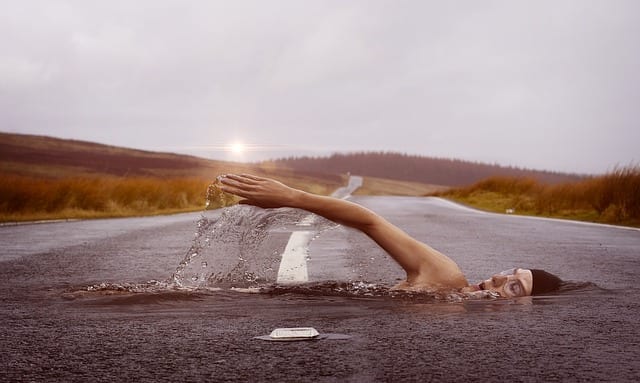 Strenuous and prolonged exercise can lead to magnesium deficiency (hypomagnesaemia).

“Exercise under certain conditions appears to lead to Mg depletion and may worsen a state of deficiency when Mg intake is inadequate. Whereas hypermagnesaemia occurs following short term high intensity exercise as the consequence of a decrease in plasma volume and a shift of cellular magnesium resulting from acidosis, prolonged submaximal exercise is accompanied by hypomagnesaemia“.

“In developed countries Mg intake is often marginal and sport is a factor which is particularly likely to expose athletes to Mg deficit through metabolic depletion linked to exercise itself, which can only aggravate the consequences of a frequent marginal deficiency. Mg depletion and deficiency therefore play a role in the pathophysiology of physical exercise.”

“Experiments on animals have shown that severe Mg deficiency reduces physical performance and in particular the efficiency of energy metabolism.
Several studies have been performed to test the effect of using oral Mg supplementation on muscular work performance. A 4-week administration of Mg to athletes increased their physical performance. This amelioration was shown by registering the maximum oxygen consumption as well as the PWC170, using both a running board and bicycle ergometry 78. Mg supplementation resulted in a significant decrease in protein release from the muscle cells during a marathon run and total creatine kinase (CCK) in serum increased less 79-80. Mg supplementation has a significant effect on respiration indices and improves lactate elimination in competitive rowers during exhaustive simulated rowing. In moderately trained subjects, the effects of magnesium supplementation were tested on some cardiorespiratory variables monitored during a 30 min submaximal effort test 81. In the Mg group, a significant decrease was found in blood pressure, heart rate and oxygen consumption. The results indicate that magnesium supplementation induces an overall improvement in cardiorespiratory performance”.

“A recent longitudinal study of a group of medium-distance runners carried out over a training season also demonstrated plasma Mg reductions during the competition period, although there were no variations in erythrocyte Mg. Since both their energy intake and their work load remained more or less constant during the study, a relationship can be established between plasma Mg changes and the stress of the competition period 48. In conclusion, exercise under certain conditions appears to lead to magnesium depletion both in humans and in animals and may worsen a state of deficiency when Mg intake is inadequate”.

Regarding the consequences of magnesium deficiency on endurance and performance, the article says:

“The effects of feeding varying concentrations of dietary Mg on exercise capacity were investigated in rats. Based on treadmill or swimming tests, the Mg-deficient rats showed a markedly lower exercise endurance capacity than rats fed the higher levels of dietary Mg 5-7,54”.

Therapy by oral physiological doses of Mg represents a major step in treating Mg deficit. The normal treatment consists of oral intake of 5 mg/kg.day of Mg for the adult in a Mg salt that is well absorbed and well tolerated. It represents the exclusive treatment for Mg deficiency”.
http://www.mgwater.com/dur18.shtml

“Daniel Reid says, “Using Magnesium Oil is the quickest and most convenient way to transmit magnesium chloride into the cells and tissues through the skin. 2-3 sprays under each armpit function as a highly effective deodorant, while at the same time transporting magnesium swiftly through the thin skin into the glands, lymph channels, and bloodstream, for distribution throughout the body. Spray it onto the back of the hand or the top of the feet any time of day or night for continuous magnesium absorption. Regardless of where you apply the spray on the body, once it penetrates the surface of the skin, the body transports it to whichever tissues need magnesium most.” http://www.magnesiumforlife.com/dosage.shtml

Magnesium Chloride can be applied transdermally using the following methods:

This is an amazingly relaxing and therapeutic treatment. It is aimed at those who are desperately deficient in magnesium and need quick supplementation. The treatment uses far-infrared heat to open up pores and boost circulation not only in the skin, but in deeper body structures. With the pores open and blood flow increased, magnesium stands a better chance to be absorbed quickly and in large quantities.

The treatment is preceded by a massage to stimulate circulation and soften up the tissues. The infrared heat helps open up the cell membranes, which contributes towards magnesium absorption.

Apart from being very therapeutic, the treatment is thoroughly relaxing, thanks to the effects of magnesium and the infrared heat. It promotes detoxification on the cellular level, helps to relieve aches, pains, muscle spasms, arthritis, sleep problems, fatigue, boost immunity, promote relaxation, help relieve water retention and is a really great start to a weight loss programme. People generally lose a lot of water during the treatment which has an added physical effect of feeling lighter afterwards.