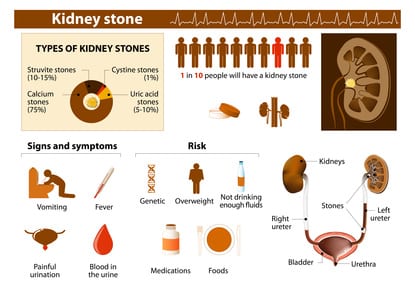 The link between kidney stones and magnesium deficiency deserves special attention due to a rise in the cases of kidney stone formation among the young and not so young.

Kidney stones are quite common in the general population. Many of us do not even know we have them, due to their very small size. It is when they grow and the kidneys try to expel them that they get trapped in the ureters causing major problems including excruciating pain.

Most kidney stones are formed by the presence of calcium and can include calcium oxalate, calcium phosphate or uric acid. The first two are responsible for most kidney stones, while uric acid forms only a relatively small percentage.

1. Acidic body environment due to a diet high in sugars, meat, alcohol & coffee. These acid-forming foods deplete the bones of calcium excreting it through the kidneys.

2. Calcium supplementation without sufficient magnesium in the diet can cause calcium overload in the body.

4. Soft drinks such as cola and others containing phosphoric acid. These also bind with bone calcium taking out of the body and getting deposited in the kidneys in the process.

A calcium-magnesium imbalance is a major factor in kidney stone formation. The main role of magnesium is to keep calcium in an ionic form to prevent it from forming crystals. It works even when we are dehydrated.

However, when the levels of calcium and magnesium in the body are out of balance then excess calcium gets deposited in the body tissues and organs leading to calcification of the tissues and kidney stones. Calcium crystal deposition in the tissues leads to all sorts of medical problems, such as osteoarthritis, gout, fibrositis, atherosclerosis, muscle spasms, etc.

Regular supplementation with magnesium corrects the calcium-magnesium imbalance in the body leading to the elimination of excess calcium from the kidneys and other body tissues and prevention of further kidney stone formation.

The fastest and most efficient way to supplement magnesium is transdermal – with magnesium chloride. The skin is a very efficient organ which allows magnesium ions to pass into the blood via the skin. Transdermal supplementation ensures that the optimal amount of magnesium is absorbed by the body. This compares favourably with oral magnesium which is in many cases absorbed only partially.

To book a MAGNESIUM WRAP IN LONDON please get in touch with us.